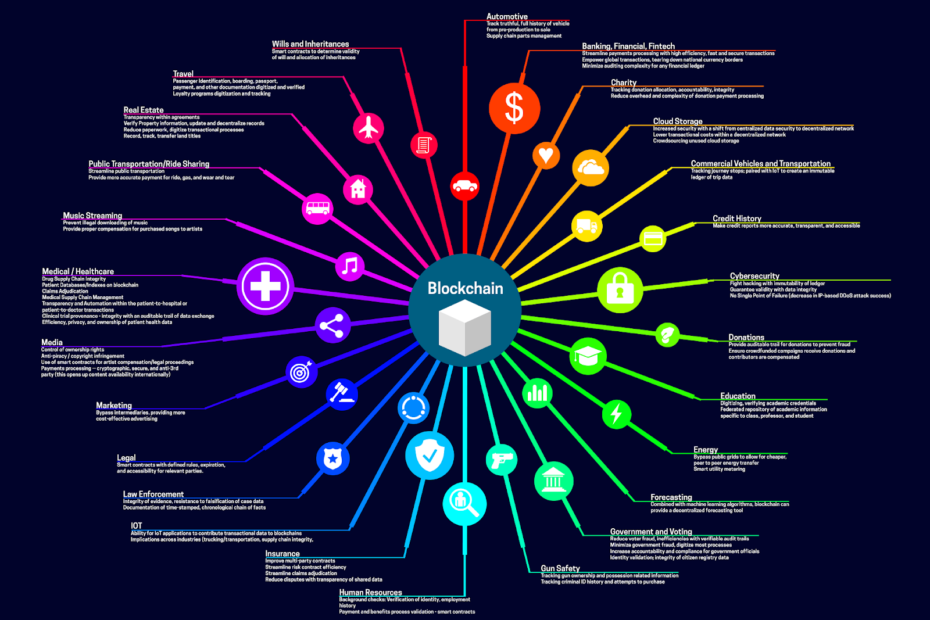 Blockchain is a futuristic technology, which very soon is going to take over the modes of financial transactions as well as the data storing technology. Blockchain was developed in 2008 by Satoshi Nakamoto for the sole purpose of transactions of the cryptocurrency bitcoin.

But since its inception more than a decade ago, it has evolved so much so, that it has replaced many modes of financial transactions and data storage technology across the globe. And not only it has made an impact in these two sectors but also is beginning to make its presence felt in several other areas. As the blockchain technology is evolving, people are coming to know about other fields in which it could be used.

Let us first have a look at some of the current uses of this technology, which all sectors are successfully using it and which are initiating its services in their domains.

Different Sectors Which Are Using the Services of Blockchain Technology

These ten sectors are using blockchain technology and Blockchain apps in its every day working. Now, since we are familiar with the current usage of blockchain in different sectors across the globe, let us now have a look at the five most innovative uses of blockchain in the present and in the future.

There are a number of ways blockchain technology could be used in video gaming. Most importantly, its use for the payment mechanism for game purchases, cryptocurrency transaction technology could be easily used to manage the in-game currency accounts. When a player wins the game’s rounds, stages or levels, they are rewarded with tokens, coins or gems that signify their level of worth in any game. So blockchain can be used to manage these functions.

There is a big market for the sale and purchase of game characters, weapons and modes in multiplayer games. Blockchain could add better transparency and security, making frauds and cheating much harder in game, also potentially open the doors to inter-game trading and transfer of game assets.

These developments are being encouraged by big technology companies. Mythical Games is an example of startups that are an example in this field. This company plans to use the capital and develop a series of games on the blockchain and provide an open environment for the game developers to make games with player-owned economies.

Let’s have a look at some of the significant benefits of blockchain games.

Anyone can check the code used in blockchain games. This would bring transparency and put players and the game creators at par with each other. No one can have any control over the outcome of the game. So, if the developer attempts to do any update in the game not supported by the player’s network, then, the step can be easily revoked.

If you play any multiplayer game and collect some assets and accessories, those are invaluable outside of that particular game.

This is a big problem in conventional games. Since blockchain is on live distributed open database, that would mean, all the assets can be reused outside the game and there are some online websites where you can sell and buy these, like Rarebits Rare Bits and Opensea OpenSea.

This means a player is not bound to any particular game and can spend its assets earned outside the game too.

Tokenomics is a term which has very recently been derived, especially for blockchain games. Tokenomics make different interest groups on a network. These tokens are designed as incentives, create new assets in the game and also give immense power to blockchain games.

Blockchains have an open database, this would help in betting games, as the players don’t trust anyone. Also, the game rules and assets mechanism can be verified by anyone. This would reduce the chances of any frauds or scams.

If the developers cannot change the rules easily, it would become difficult to exploit the existing users. This feature of the blockchain games will benefit both the developers and the players.

Blockchain is the future of all renewable energy; this technology platform is developing consumer-driven power generation. Blockchain is providing sophistication to our power supplies, which were previously dependent on highly centralized systems. Blockchain provides for a transparent platform on which the consumers can monitor power prices and diversify their power usage according to their requirements.

Many startups across the globe are using blockchain as a tool to make power grids more accessible by providing data-sharing in real-time. The idea for creating power grids based on blockchain is very simple, by giving the consumers total control over the source of energy as well as the information on the production of it promotes sustainable energy.

The consumers using smart-grid that works on the blockchain can compare their power providers rates, schemes, etc. and then buy directly from them.

Consumers can trade among themselves their generated resources; they can trade the energy with neighbours, and also with the grid. This concept of real-time energy trading could be controlled through smart contracts.

You can determine the limit of electricity you want to use and the rest produced can be sold off to the government or others in the neighbourhood.

Also, blockchain in power generation is using tokens to check electricity-generating assets. Tokenizing electricity will help people in sharing the ownership and output of renewable energy and it will also increase liquidity in the renewable power finance market.

Blockchain technology is a cost-effective and smart solution for the problems faced in the present day’s voting procedure. The voters will have to use decision tokens to cast their votes from a computer system or a mobile phone, which will be logged onto an immutable blockchain. No manipulation or tampering is possible in this case. This technology will be very helpful in making decisions where resources and authority is decentralized.

Blockchain will keep a track of the votes. Here, the voters can count the number of votes themselves, and because of the blockchain audit, they can also verify that no tampering with the votes is done or they are changed or removed.

Blockchain’s basic characteristics, immutability, accountability and security help with this technology’s potential for securely recording votes. In this system, voting data is input in blocks that are encrypted and locked to prevent tampering and unauthorized viewing. The use of this technology means that the information is decentralized; entrusting that all the data is copied on the nodes across the network.

Data is becoming a valuable currency. Business across globe accumulates tones of data, which is very conveniently attacked by the hackers. One reason behind this is that the data is stored at one single place, making it easy for the hacker to tamper with it.

Decentralized nature of blockchain safeguards our data from hackers, as they don’t get a single point of entry, which complicates a lot of things for them.

Blockchain provides one of the best tools to protect data, preventing fraud and reducing the chances of data theft. In order to tamper or corrupt a blockchain, the hacker would have to gain access to the data which is stored on every node’s computer in a network. This would mean tampering with millions of computers. Bigger blockchain networks have a very low risk of getting attacked because of the complexity to penetrate in such a system.

This structure provides blockchain with the ability to be the safest form of storing and sharing data online.

IoT refers to a network of computers known as nodes that collect and exchange data. Database of every organization, eCommerce, e-transactions, cloud storage, real-time records is included in this technology.

IoT platform provides a common network for devices to preserve their data. Communication devices, sensors are embedded in different objects, like mobiles, TVs, electrical appliances, traffic lights, cars and other equipment. These sensors transmit data regarding the working conditions of these devices and allows them to send as well as receive the signals from each other online.

IoT systems work on a centralized platform. Information is transmitted from the device online to the cloud where the data is processed using analytics and then reverted to the devices. Decentralized blockchain technology provides high-level security.

Decentralized platform applications carry a lower risk of getting tampered and fraudulent activities because of the distributed ledger technology, which uses asymmetrical cryptography to immutably store the data and other related information on the network.

This technology will make the IoT more affordable than it is today. When security attacks are removed by placing IoT on distributed networks and storing data through distributed ledger technology, IoT becomes very affordable. Blockchain will make IoT more easily accessible and will be prevented from hacks.

So folks, these were some of the innovative uses of blockchain technology as known to us today.

We are quite sure that as time progresses and different researches are done on this technology, many more uses of it can be found in the near future.

Currently, we are not even aware of the extent to which this technology can be used, as only a fraction of its true potential is being used. It is just a matter of time when this technology will be used at its full potential.

So, let’s hope we find them very soon, and blockchain technology makes connecting to the world even simpler.

Any cookies that may not be particularly necessary for the website to function and is used specifically to collect user personal data via analytics, ads, other embedded contents are termed as non-necessary cookies. It is mandatory to procure user consent prior to running these cookies on your website.